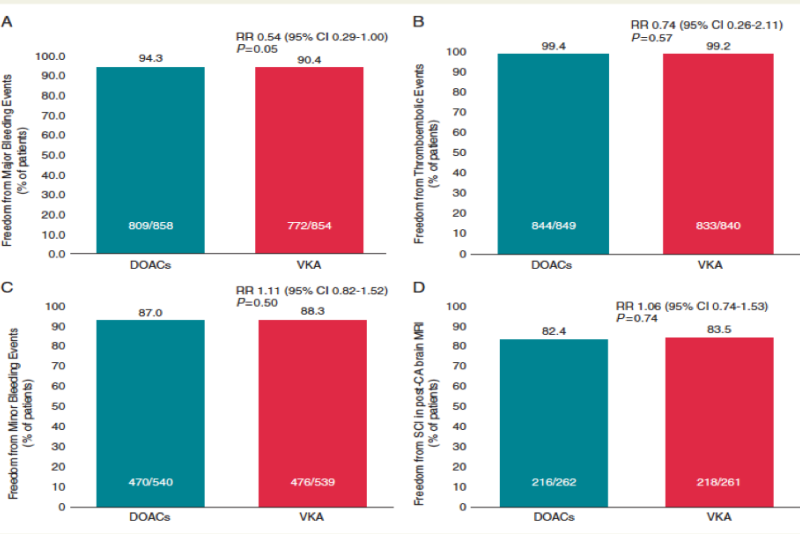 Catheter ablation of atrial fibrillation is associated with the potential risk of periprocedural stroke, which can range between 1% and 5%.

We developed a prospective database to evaluate the prevalence of stroke over time and to assess whether the periprocedural anticoagulation strategy and use of open irrigated ablation catheter have resulted in a reduction of this complication.

We collected outcome data from 6454 consecutive patients in 9 centers on stroke/transient ischemic attack and bleeding complications during and early after performing the same ablation procedure with the same anticoagulation protocol.


Patients were divided into 3 groups

●     No stroke/transient ischemic attack was reported in Group 3

The combination of an open irrigated ablation catheter and periprocedural therapeutic anticoagulation with warfarin reduce the risk of periprocedural stroke without increasing the risk of pericardial effusion or other bleeding complications. Likewise, we investigated that an uninterrupted DOACs strategy for CA of NVAF appears to be as safe as uninterrupted VKA without a significantly increased risk of minor or major bleeding events. There was a trend favouring DOACs in terms of major bleeding. Given their ease of use, fewer drug interactions and a similar security and effectiveness profile, DOACs should be considered first line therapy in patients undergoing CA for NVAF.